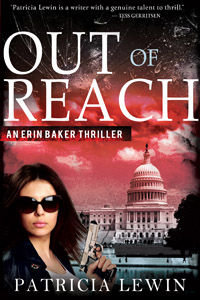 Out Of Reach
(An Erin Baker Thriller Book #1)

A rising star in the CIA, Erin Baker is driven by tragedy from her past.

When she was a child, her eight-year-old sister, Claire, was kidnapped. Though Claire was miraculously found, she was changed forever. As was Erin, who now just might get what she’s always wanted: the chance to make a difference in someone’s life. But she must be willing to risk everything she holds dear.

When a child disappears near her home, Erin is certain there is a link to her sister’s cold kidnapping case. She meets Alex Donovan, an FBI agent on the hunt to find the missing boy, whose record for locating missing children is unquestioned. Suddenly Alex and Erin find themselves on a desperate pursuit – from the streets of America’s most peaceful neighborhoods to a horrifying underworld where children are stolen and trafficked. And as they get closer to the truth, they make their own lives, and the lives of everyone they love, into perfect targets for a killer.

THE NEW KID was finally crying.

Softly. Into his pillow while the rest of the mansion slept. But Ryan, standing outside the door, heard, and a touch of sadness squeezed his throat. This one had held out longer than most. He’d been here two days, with no sign of breaking. Ryan had to admire that.

Shifting the tray to one hand, he unlocked the door and slipped into the room.

Some of the kids broke right away, the soft ones, sobbing nonstop for their parents. Others took longer. The street kids, the fighters. They got angry, hiding their fear with hateful words. The really strong ones, the leaders, said very little, telling Ryan and the rest to go fuck themselves without uttering a word. This boy, pretending to sleep as Ryan crossed the room, was one of those, refusing even to eat.

But his defiance had finally begun to crumble.

The tears were Ryan’s cue to offer comfort. One child to another in a scary adult world. Though Ryan wasn’t much of a kid anymore. Sixteen on his last birthday, he’d long outgrown any usefulness other than tending the new arrivals.

“I thought you’d be hungry,” he said, and set the tray on the nightstand.

At first there was no response from the bed. Then the kid’s survival instincts kicked in as the smell of fresh bread and hot chicken soup teased his empty stomach. He swiped a fist across his eyes, and then rolled over.

“I’m not supposed to bring up food after hours.” Ryan sat on the edge of the bed. “But it won’t hurt this once.”

The boy pushed up against the headboard. “Who are you?”

Ryan felt the squeeze of sadness again. “My name’s Ryan.” He hesitated, then broke one of his own rules. “What’s yours?”

Usually it was better that way, easier, not knowing anything about the kids he cared for. Not even their names. “They don’t tell me much around here.” The truth, but something more, a common bond between them.

The kid looked doubtful, or maybe he was just figuring out the downside to sharing his name. Finally he said, “Cody Sanders,” then, “Where am I? And what is this place?”

Ryan glanced around at the large bedroom and sitting area. Like all the others in this wing of the house, it was designed for a time when the wealthy owners entertained overnight guests. But that was all in the past. Now it was little more than a gilded prison. “Just a house, or I guess you’d call it a mansion.” The rest, that he didn’t know the exact location of the estate, he’d keep to himself.

Cody hesitated, then asked, “Where is he?”

“Trader?” The word came out as a question, though Ryan knew exactly whom Cody meant.

“I doubt it, but it’s what the staff calls him.” When they dared speak of him at all. “Don’t worry, he’s not here right now.”

“Why did he bring me here? What does he want from me?” As usual, once the questions started, they tumbled out one after the other and begged for answers Ryan didn’t have. Or was willing to share.

“Look.” Ryan shoved off the bed. “I better get going.” It was easier than staying. “I just brought you the tray.”

Cody looked at the food, obviously hungry, but made no move toward it. “Help me get out of here.” Not, I want my mom or dad. Just, let me go.

“I can’t.” Ryan started for the door. He could no more leave than Cody. Nor did he want to. He was safe here, safer than anywhere else he’d ever lived.

“Are you afraid of him?”

Ryan couldn’t deny it. Trader was the scariest man he knew, and Ryan hadn’t survived this long by defying men like him. “Eat your soup, it’s good.”

“You could help me if you wanted.”

“It’s just not possible, okay.” Ryan hadn’t planned to explain himself to this kid, but the words came anyway. “There’s no place to go. We’re in the middle of nowhere.” There were guards. And the dogs.

That touched off a spark of anger. “This is my home.” In a few days, this kid would be gone, but Ryan would still be here. “I live here.”

Cody studied him for a minute, as if evaluating Ryan’s claim, then said, “I will get out of here.”

Ryan didn’t answer. What was the point? The kid wasn’t going anywhere until Trader came for him. Sooner or later he’d figure that out for himself.

As he closed and locked the door behind him, something slammed against the other side, then slid to the floor. Ryan pictured the tray, the shattered dishes and food in a puddle on the expensive rugs.

“Damn.” It would be his job to clean up the mess.

The kid was going to make this difficult. Too bad. Because he would break. They all did. Eventually.

3 Responses to Out of Reach